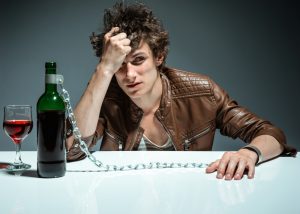 Drug addiction describes an inability to cease taking a substance despite the substance having direct or indirect negative consequences on the life and well being of the user. The user will develop a tolerance to the drug that will require them to take ever increasing quantities of the substance to maintain the same high as their body becomes acclimatized to it, but they will be unable to ever satisfy this urge. The inception of what is to become a pervasive pattern of repeated abuse of a substance typically takes place during an individual’s formative years as adolescence is the period in which they are entering a new phase of life and being exposed to new influences that will determine the path they take later in life. While most high schoolers will have taken an illicit substance at one point in their life, the vast majority will not go on to become addicts. However, the majority of those who do become problematic drug users will have first begun engaging in substance abuse during this crucial period of adolescence. The introductory substances, the substances that induct them into this world of substance abuse, are typically cigarettes, alcohol and marijuana.

Typically there are a number of variables that will influence whether or not an individual will go on to develop a substance abuse disorder. The most obvious is having been exposed to illicit substances in the first place. It goes without saying, one cannot develop an addiction without first having been exposed to drugs in the first place. These substance that introduce an individual into this world are known as “gateway drugs”. Humans are not solitary animals, they are group orientated and they take cues from those around them, and so this is one of the most powerful variables that will go on to cause drug addiction. If those around you are engaged in drug abuse and treat the use of substances with flippancy, this atmosphere of casual drug abuse will inspire further abuse and normalize it. This is especially true if those with this flippant attitude to drugs are close relatives.